The Eye of the Horse

I have recorded two snippets from the novel the form of podcast:

(1) The first paragraphs of the Third Chapter, present the central character, the protagonist, Woody LaRiveire, who unexpectedly encounters his estranged wife, Arianne. The setting is the Evangeline Hotel in downtown Lafayette, Louisiana, on a soft summer Saturday night, three hours past sundown in 1963. The snippet is in English. 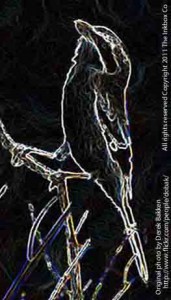 (2) Le Moquier Francais/The French Mockingbird, is the recreation of an imaginary radio broadcast on the following day, June 9, 1963, when Woody and his son are riding in an old 49 Merucry truck. They turn on the radio and hear Cousin Dud, a Cajun politician and huckster, reading the local political news. Cousin Dud describes Woody as the French Mockingbird or the Moquier Français, also otherwise known in English as a butcher bird. The parts of the snippet are translated from English into Cajun French.

Download and Install Quicktime for Windows – Media Player for Itunes: